Bella Thorne and Abella Danger filmed topless making out scenes for a new video scheduled to be released in full on February 26, 2021. YouTube took down already-previewed parts of it. 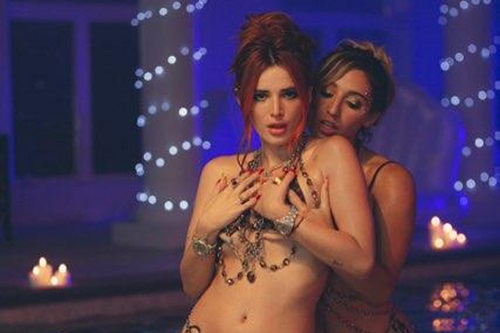 Bella Thorne, a multi-millionaire at 23 years old, has a new video coming up this Friday, titled “Shake It”. The video, directed by Thorne, includes adult film star Abella Danger, and the two make out in it. Bella is an actress, model, singer and director, who “took over” OnlyFans in a day back in August 2020, earning $2 million in a few days – the first million in less than 24 hours. The incident triggered outrage among sex workers and policy changes on OnlyFans. Bella has since been considered Evelyn Claire’s arch-nemesis – more on that later in the article.

Posting a preview of the full clip, YouTube quickly shut it down – making Bella feel what sex workers encounter very often – censorship. Bella has almost 7 million followers on Twitter, over 24 million on Instagram and almost 600,000 on YouTube, for a combined total of almost 32 million.

Tweeting her outrage, Bella said: “Hey YouTube - why’d you take down my video for Shake It? Is it because I’m having fun with Abella Danger? Male artists always have women shaking ass in videos… why can’t we? Censorship against women needs to end!!! I’ll never stop fighting against this bull%h*t. Stay tuned”.

Hey @youtube - why’d you take down my video for Shake It? Is it because I’m having fun with @dangershewrote? Male artists always have women shaking ass in videos... why can’t we? Censorship against women needs to end!!! I’ll never stop fighting against this bull%h*t. Stay tuned. pic.twitter.com/nP83krKSMM

Back during the OnlyFans incident, Bella Thorne claimed that she was filming a documentary about the platform and it wasn’t for profit, but the director she named quickly clarified that he has no idea what she’s talking about. Additionally, Bella then promised to help sex workers by promoting their OnlyFans channels - but never followed through.

Speaking to Page Six about the clip, Bella said she’s hesitant to star in adult films herself because female directors on sets for other movie roles made her feel “very, very uncomfortable”.

Abella Danger, born Rosa Luisa Cruz in Miami, Florida, is an extremely popular adult film star. In the past year, she’s been highly associated with Bella Thorne, creating conflicts between fellow adult film stars who are reluctant to speak up against her “betrayal”. They freely attack Bella herself, though. In 2020, Evelyn Claire attacked Bella on Twitter on separate occasions. First, she said she walked off a set because they “made her look hideous” for an underground orgy nightclub scene in a Bella Thorne movie. Following her fans responses, she added: “I’m glad we can all unite under the flag of weirdchamping Bella Thorne”. 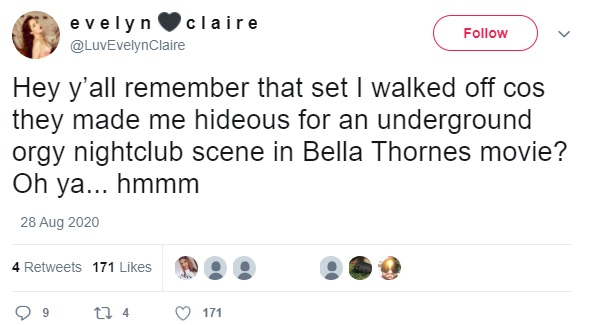 Later that year, in response to the OnlyFans saga, Ashe Maree tweeted to Bella, and later deleted: “I promise not to give you the stink eye if I ever see you in public if you use your platform to bring awareness to this SISEA & Mastercard/Visa bullshit. it’ll take just a few seconds of your time… my stink eyes can last many minutes”. Evelyn replied to both, saying: “She won’t 😂 she’s not about that life cos she’s not being threatened”. 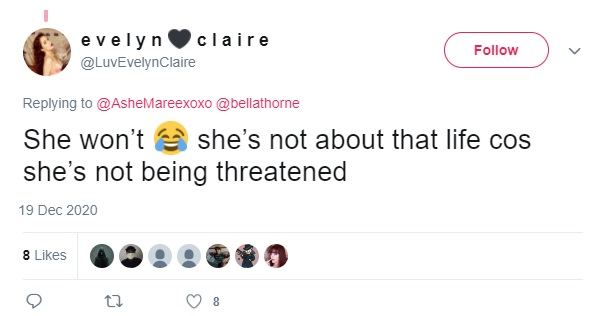