Model agencies have reportedly begun asking adult performers for a cut of their OnlyFans profit, this according to adult film performer Gianna Dior.

Dior is referring to Mark Spiegler, a talent agent and founder of Spiegler Girls, the agency she’s a part of, along with our own Evelyn Claire. “It would definitely end in a choke hold”, Dior said, “but Spiegler isn’t stupid, so we’re fine”, she presumed.

Evelyn Claire ‘liked’ the posts, indicating she is hopeful as well that the two will not have to face such a scenario in the future.

Responding to Dior, the Adult Performance Artists Guild clarified: “Your agent should not be asking for a cut of your only fans money in any way shape or form. If they’re doing this, you need to come to us. We will get our lawyers involved”. 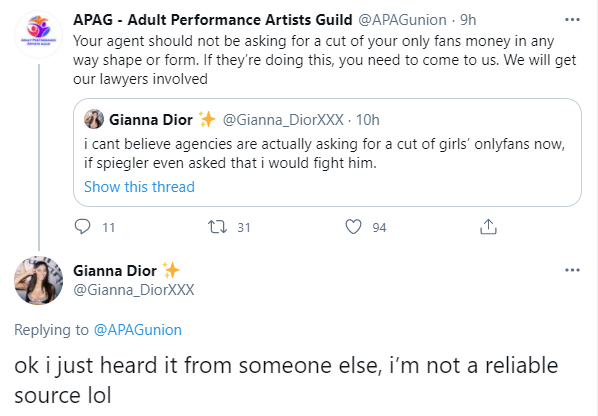